Two countertenors for an emblematic work, Pergolesi's Stabat Mater: the resurrection of the historical creation of this work in France, brought by two castrati of Louis XV’s Royal Chapel !

A few months before his death at the age of twenty-six, Pergolesi received a commission for a new Stabat Mater to replace an earlier version by Alessandro Scarlatti. Overcome by illness, he expressed the Virgin's suffering in the passionate language of opera. Pergolesi's Stabat Mater, premiered in 1736, is one of the most emblematic works of the Baroque period, and had a profound effect on the musical world of the 18th century, particularly in France.

The Italian castrati of the Chapelle Royale de Versailles (Louis XIV brought eight of them from Italy in 1679 for his religious music), brought the score from Italy and promoted it eagerly at the Court of Louis XV and at the Concert Spirituel. On discovering Pergolesi's Stabat, Paris was enraptured and saw it as the revolutionary work of a Neapolitan genius, who had unfortunately died so young... Its success continued throughout the century. In Vivaldi's case, the same Stabat Mater gave rise to a virtuoso work, composed in 1712 for performance in Brescia, and mirroring Mary’s laments, the motet In Furore unleashes opposing passions in a work that is as dazzling as it is contrasting: here is the fury of divine anger !

For the magnificent duet of angelic voices lamenting Mary's sorrow at the foot of the Cross, the two performers must be able to blend their timbres, like the two Neapolitan castrati for whom this music was composed.

The brilliant sopranist Bruno De Sá brings all the light of South America with a voice that undoubtedly reflects the angelism of some of the castrati of the Vatican, the Royal Chapel of Naples... or that of Versailles! And the alto voice of Cameron Shahbazi, a singer of Iranian origin, brings an unheard-of commentary colour to this exceptional duet.

This concert is dedicated to the emory of Denis Jovignot 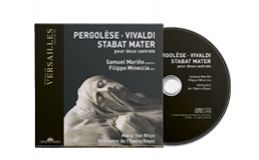