Vivaldi's famous Four Seasons, published in Amsterdam in 1725, were so successful that they almost eclipse Vivaldi's other concertos (over five hundred!). If they owe their success to a particularly expressive and virtuoso "programme music", Vivaldi was already very much in demand throughout Europe, and his success in opera put him at the forefront of Italian composers. He was particularly admired and played in France, and the French ambassador to Venice asked him to write works in honour of Louis XV. It was probably because of this that Vivaldi was approached by a French collector to acquire concertos by him: those now known as the 12 Paris Concertos: I Concerti di Parigi.

If their style often refers to features of French music, such as the overtures, or typically French bourrée or minuet movements, they are above all true and dazzling Vivaldian concertos. Inventiveness, colours, magnificent melodies, flawless virtuosity: all of Vivaldi's assets concentrated in a cycle of twelve remarkably complex works, which will be a real revelation for the public, with the publication of the CD that will grant them recognition at last! They will be served here with vitality by the Versailles Royal Opera Orchestra, led from the first solo violin by its conductor Stefan Plewniak, a true devil of a violinist: and in the Four Seasons, he shows his irresistible spirits, prince of summer skies and icy demon of the winter! 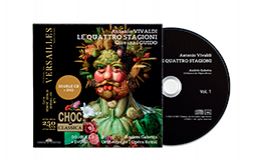