The 2019-2020 season will show a History of Opera in France, from the origins to Revolution with major productions: The Royal Ballet of the Night (1652), where young Louis XIV featured for the first time as the sun; Ercole Amante by Cavalli (1662), commissioned for the royal wedding celebrations; the Bourgeois Gentilhomme (1670), the most famous comedy-ballet by Molière and Lully, also celebrating his 350th birthday in 2020; Cadmus and Hermione (1673), Lully’s first opera; then his splendid Isis (1677); magical Circe (1694) by Desmarest; impetuous Semiramis (1718) by Destouches; two masterpieces by Rameau, with the exotic Indes Galantes (1735) and impertinent Platea (1745); the magnificent Boréades (1763), Rameau’s musical testament; finally Richard Lionheart (1784), a comic opera by Grétry, with the famous aria “Ô Richard, Ô mon Roi”, the last one to be sung at Versailles in front of the royal family, immediately before their departure from the Château: the Royal Opera closed immediately. You are invited to an extraordinary journey into the history of opera under the French monarchy, which could not find a more apt setting than the Versailles Royal Opera.

Foreign masters are also on the programme: Monteverdi’s Orfeo (1607), Psyche by Locke, La Finta Giardinera (1755) by Mozart and The Magic Flute (1791), sung in French. And two anniversaries of French passion: Berlioz, with the extraordinary Benvenuto Cellini (1838) interpreted by Sir John Eliot Gardiner in the magnificent historical sets created in 1837 for the Versailles Opera; and Offenbach, with the Perichole (1868) to enchant the end of year celebrations.

The recitals will feature the great voices of our time, from Cecilia Bartoli, Philippe Jaroussky and Jakub Józef Orliński, to Marie-Nicole Lemieux, Patricia Petibon and Lucile Richardot, for baroque music, but also the great Wagnerian singers Michelle de Young and Simon O’Neill.

Great sacred compositions from the baroque repertoire will have a place of honour: Requiems by Campra and Mozart, the latter’s Mass in C and Davide Penitente, Bach’s Magnificat, Motets and Saint John’s Passion, Handel’s Resurrection and Messiah and masterpieces by Praetorius. There will also be a cycle of four concerts of Grands Versailles Motets by Robert, Lully, Lalande and Clérambault; and the Missa Assumpta est Maria by Charpentier…

On the first commemoration day of the Armenian Genocide, Château de Versailles will pay a vibrant homage in the Royal Chapel. Alexandre Tharaud will propose an initiatory journey in the most beautiful rooms of the Château, with "Versailles music".
In our dance programme, two opportunities to see and hear the famous Bolero, in Béjart’ s iconic choreography and also in Preljocaj frenzied version and to admire the revival of Thierry Malandain’s vision of Marie-Antoinette, who will be celebrated during the summer months on the occasion of her wedding anniversary.

Finally, two exceptional 1770 anniversaries will be celebrated as they deserve. First Beethoven, born the same year as the Royal Opera: the complete symphonies, piano concertos, and violin and piano sonatas will give us the dimensions of this universal and revolutionary genius.
And for the crowning moment of its 250th anniversary, the Royal Opera is bringing to France a work commissioned for the MET’s centenary, but in essence designed for our stage: Ghosts of Versailles  by John Corigliano, where the characters of the Marriage of Figaro mingle with Marie-Antoinette, in the first 20th century opera ever shown in Versailles.

With 10 opera productions and 10 operas in concert version, more than 100 performances, mostly of works from before the French Revolution, 10 of which to become CDs in our collection, in 10 years Versailles has become the only opera dedicated to “baroque” music, also presenting the greatest variety of compositions of the time, on period instruments. This specificity is of course due to the exceptional environment of Versailles, for which this music was composed, but also to the public’s curiosity and passion: thank you, because this anniversary season is yours first! I wish you wonderful discoveries.” 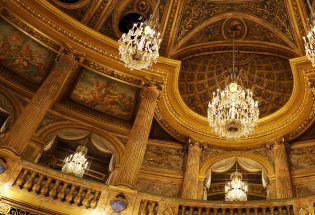 Discover or rediscover major shows filmed in the most beautiful places in the Château de Versailles. 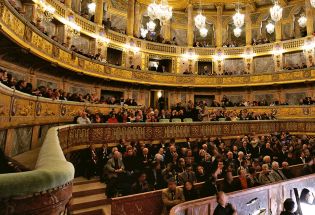 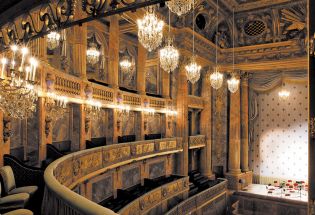 An orchestra is quite a story…or a story to build! This is the ambition the brand new Orchestre de l’Opéra Royal, created for the performances of the Ghosts of Versailles.